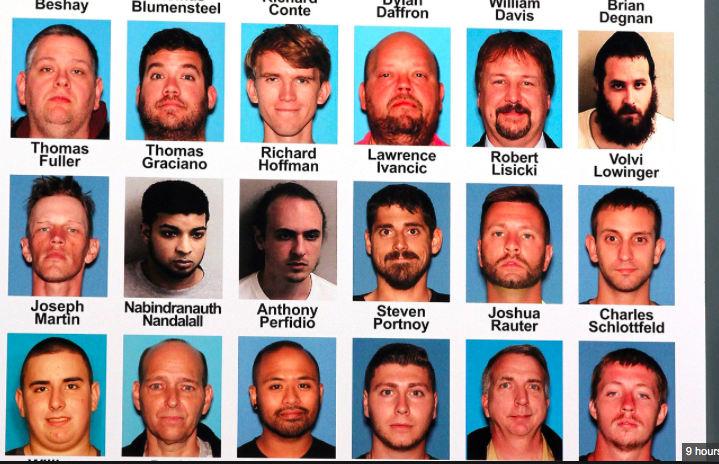 Most of the defendants were arrested when they arrived at a house in Toms River, New Jersey, where they allegedly expected to find their victim home alone. Instead, they were met with dozens of law enforcement officers.

Those arrested include a Howell Township police sergeant, 47-year-old Richard Conte, who allegedly attempted to meet an undercover officer posing as 15-year-old girl for sex. Investigators say Conte claimed in online chats that he was 19, and he had condoms in his pocket when he was arrested.

“It is disturbing that some of the alleged child predators from this operation held positions of public service and authority,” said Col. Patrick Callahan of the New Jersey State Police. “But behind closed doors they went through great lengths to avoid detection online, frequenting social media sites with the sole purpose of targeting unsuspecting children.“

The arrests were made over a five-day period from Sept. 5 through Sept. 9. In addition to Conte, those arrested include a nurse, a firefighter, college students and a registered sex offender. One defendant traveled to the undercover house all the way from his home in the Bronx.

Attorney General Gurbir Grewal urged parents to familiarize themselves with these apps and warn their children about sharing information with strangers. “If children appear anxious or evasive when this topic is raised, it may be a red flag,” said Grewal.

Below are the 24 men arrested as a result of the sting operation. All face second-degree charges of attempted luring or enticing a child with a purpose to commit a criminal offense against the child. Additional charges are as indicated. (Click here for full story FOX News.com)