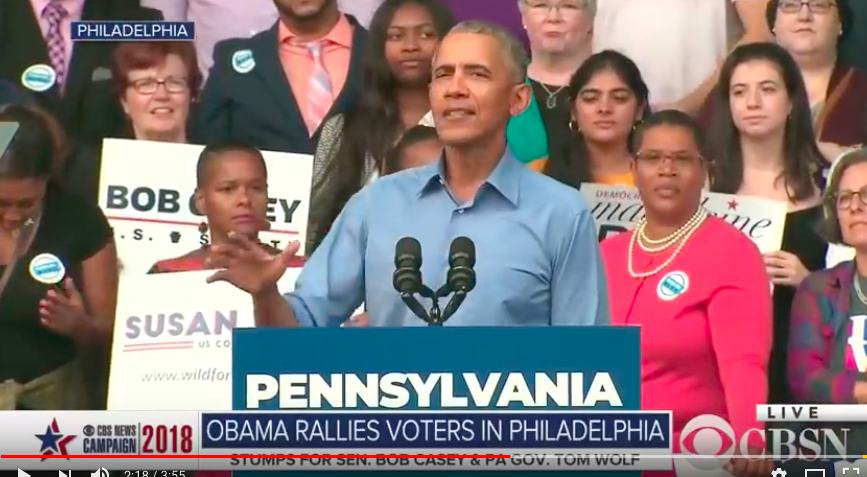 With weeks to go until the midterm elections, former President Barack Obama hit the campaign trail for Democrats — on Friday night, in Philadelphia. The former commander-in-chief stirred up Democratic support for Pennsylvania’s Gov. Tom Wolf, Sen. Bob Casey, and others in the City of Brotherly Love.

CBS News reported, Obama joked that he thought, by now, people would realize how crucial voting is, and his visit wouldn’t be necessary. “But, some people may not have heard the news yet. So I’m heard to deliver it. This November’s election is more important than any I can remember in my lifetime,” he said.

Obama joked that politicians say that all the time, and he said so during his own campaign. “This time, the stakes really are higher,” Obama said. “The consequences of any of us sitting on the sidelines are far more dangerous.”

The former president also emphasized the value of having women in office. Pennsylvania currently has no women in Congress, although a record number of women are running nationally this election cycle.  “Pennsylvania’s a great state, but let me just say Pennsylvania right now, you have no women in Congress. You can send seven Democratic women to Washington if you vote! And I will tell you — and Michelle didn’t put me up to this — stuff works better when women are involved,” Obama said.

Obama kicked off his 2018 midterms campaigning at the University of Illinois, where he told voters the greatest threat to American democracy is not the Trump presidency or Republicans in Congress, but complacency in the American public. The former president also said the current president is a “symptom,” not the “cause” of tribal divisions in the country.

“It did not start with Donald Trump,” Obama said. “He is a symptom, not the cause,” Obama said in Illinois. “He’s just capitalizing on resentments that politicians have been fanning for years,” Obama added at the time, claiming Mr. Trump capitalized on a fear and anger that is rooted in the nation’s past but also rooted in upheavals in the nation in recent years. (CBS News.com)