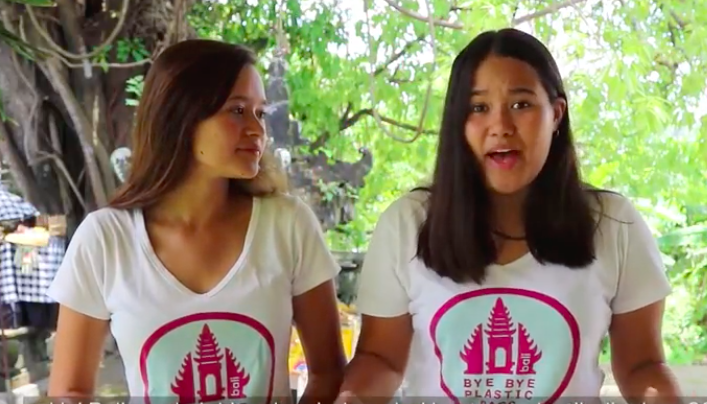 It’s scary to be a young person who cares about the world today. If we don’t dramatically cut greenhouse gas emissions within the next 12 years, dangerous climate change will be inevitable. If we don’t change how we dispose of waste, there will be more plastics than fish in the oceans by 2050. This is scary for everyone, of course, but young people will have to live in a hotter, dirtier world for longer.

Echowatch.com reported, many teenagers around the world aren’t letting this get them down, however. Instead, they are rising up to make the world they will inherit a better place. One of those teenagers is 17-year-old Melati Wijsen, whose attempts to clean up her native Bali earned her a CNBC profile Tuesday. Indonesia is the world’s second worst offender when it comes to plastic pollution, and when Wijsen was only 12, she started a movement called Bye Bye Plastic Bags with her younger sister Isabel.

Melati said she was inspired by learning the stories of leaders like Nelson Mandela and Mahatma Gandhi at the Green School she attended in Bali, which emphasizes sustainability.  “What can we do as kids living on the island of Bali?” she asked herself. The answer was a signature-gathering campaign that ultimately convinced Bali Governor Made Mangku Pastika to agree to work towards making Bali plastic-bag free by 2018.

The sisters have not stopped there. They have also launched an initiative called Mountain Mamas that helps women in Bali’s mountains earn extra income by learning how to make bags from donated, recyclable materials. And they’ve spread their movement beyond Bali. Melati has given four TED Talks in three years, and young people around the world have responded by asking how they can get involved.

“They were the ones reaching out, sending the emails, saying, ‘Hey, I want to bring Bye Bye Plastic Bags back to my country, back to where I come from,'” Melati explained in a Facebook video. There are now 22 chapters in 18 different countries.

The sisters have not solved Bali’s plastic problem, of course. In December of last year, beach trash got so bad that the island had to declare a “garbage emergency,” CNBC said. And the governor’s promise to ban plastic bags hasn’t entirely materialized. But Melati is learning the political skills that will help her to make a difference throughout her life.

“As a 17-year-old changemaker, what has been super interesting and a learning curve for me has been learning how to deal with politicians,” she told CNBC. “Dancing with politicians—it’s three steps forward, two steps back, and then again and again. But I understand that we need to be doing it together.”

She spent the past week at the Our Ocean Conference in Bali, where more than 250 businesses and governments pledged to make all plastics recyclable, compostable or reusable by 2025. Melati plans to take a year off before college. She is currently working on getting 1,000 Bali businesses to reduce their use of single-use plastic bags, and eventually wants to launch a center to gather all the young people around the world trying to make a better future. (Echowatch.com)

Published in Achievement, Diaspora and Economy