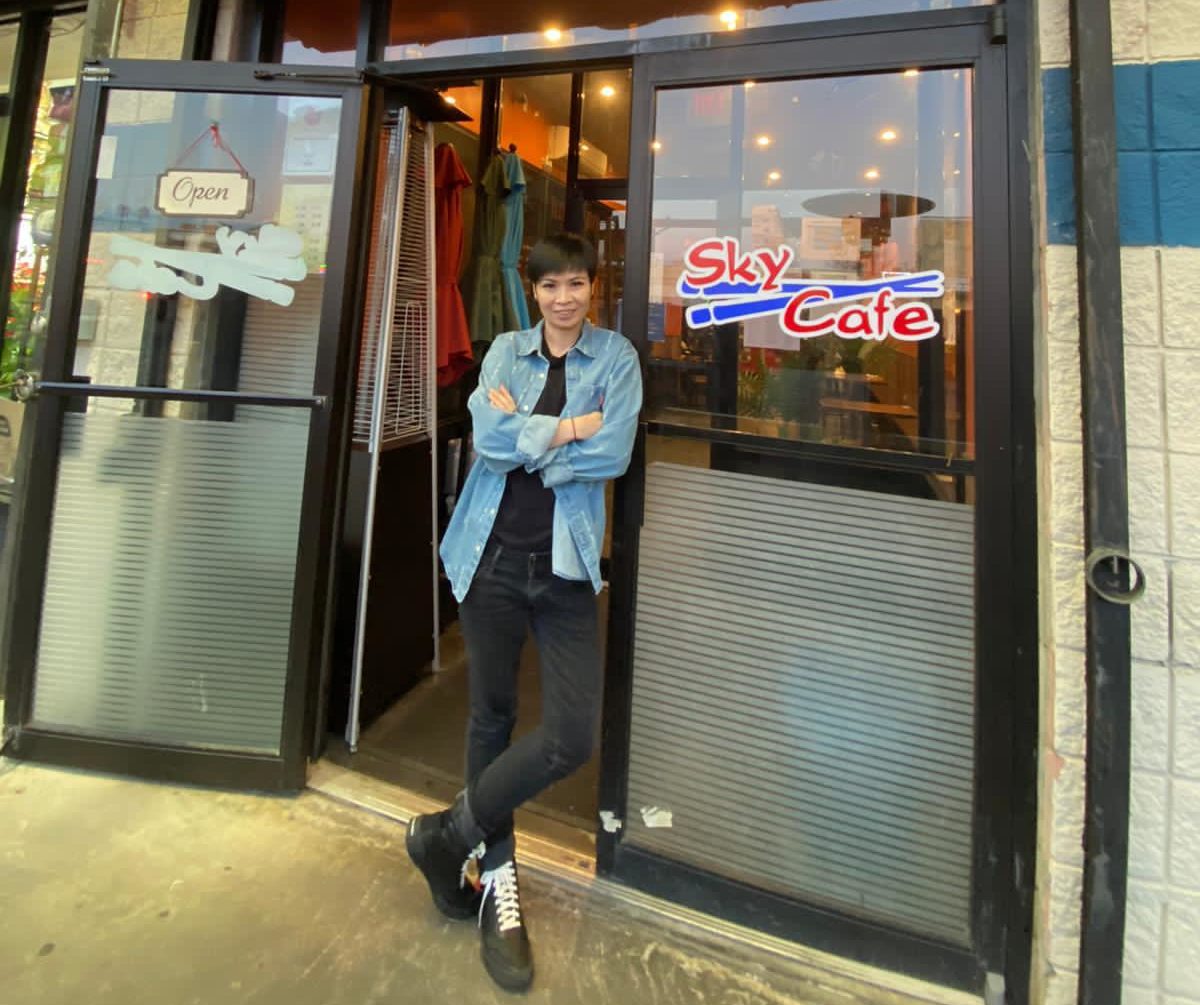 Indonesian restaurants in Philly have kept operating through ingenuity and tenacity. But how much longer?

This reporting was produced with support from Resolve Philly, the organization that leads Broke in Philly, a collaborative reporting project on economic mobility.

[Editor’s note: This story is one of a multi-part collaboration with the Indonesian Lantern, Philadelphia’s Indonesian news organization.]

“It’s so depressing,” said Betty Yu about the new business restrictions imposed by the City of Philadelphia, which will be in effect until January 1, 2021.

“Our renovation is basically useless,” added Yu, the owner of Sky Café, an Indonesian restaurant on 12th and Washington Avenue in South Philly. Yu said that she just finished renovating her restaurant last year, expanding to fit up to 75 people in the dining room.

About three months later, Philadelphia introduced the lockdown and forced restaurants  to close their dine-in facilities. Now, despite all the money she put into renovations, Yu can only offer takeout and outside seating. “

“If only I knew, I wouldn’t have renovated the place,” she said, “it’s useless now and I have to pay the rent, which is very expensive.”

Over the fall things got a little better, but it didn’t last.

“Our revenue was down by 60% and as the revenue was slowly coming back up to 60% of [what it was] last year, these rules happened,” Yu  said.

In light of the new surge of COVID-19 cases, Mayor Jim Kenney and Health Commissioner Thomas Farley announced a round of limitations on businesses and gatherings starting on November 20. The rules once again hit industries that have suffered the most due to the pandemic, such as food service and entertainment.

Restaurants are no longer allowed to serve diners indoors. Takeout and delivery continue like usual, but outdoor dining is now limited to four people from the same household per table.

As the weather is getting colder, Yu said that her 16 outdoor seats will not be very helpful. ‘”It will be very cold for people to eat and sit outside,” she said.

“I try to keep them all, but it’s very hard,” she admitted. Every morning Diana, 34, and her sister, Maylia, 33, and their mom, Ena, cook the food in their 15th and Hicks Street restaurant in South Philly. Hardena was founded by Ena and her husband Harry Widjojo in 2001 to serve the  growing Indonesian community in the area.

The restaurant has grown since then, managed by the daughters and 2017, finding a wider audience, earned a semifinalist nod for a James Beard Award in 2018. Hardena has also been featured on Guy Fieri’s show “Diners, Drive-Ins and Dives” on Food Network and Anthony Bourdain’s show “The Layover.”

But, all these accolades have not spared Hardena from the effects of the pandemic.

Diana Widjojo explained that the pandemic and new rules have forced her to be creative. Over summer, Widjojo introduced the idea of selling different Indonesian foods in a pizza box because her small restaurant only does takeout. Hardena only has room for 15 diners and no outdoor seating. 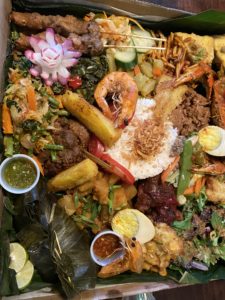 Widjojo used pizza boxes, lined with banana leaves, to serve  as many as 18 different Indonesian specialities, from nasi tumpeng, a festive rice and vegetable dish, to vegetables and shrimp to chicken saté with peanut sauce.

“We only sell seven to eight boxes a day because it takes a long time to cook the food and prepare and decorate it in a box,” she said. The box sells for $75 plus tax and is enough for 2-3 people. The boxes are not only filled with different dishes, but elaborately decorated with edible flowers and garnishes.

Widjojo said The #NotPizza box has helped them keep the doors open.

“Our revenue dropped by 60 percent at the beginning of the pandemic, and this product helps so our revenue is now at around 70 percent of our revenue last year,” she said.

Widjojo posts on Instagram each Monday morning for people to order and book the time slot for pick up.

“This pandemic forced us to be creative,” she added. Beddy Sonnie, the owner of  Martabak OK, an Indonesian restaurant on 18th and Washington Avenue, said their sales dropped by more than 50% when COVID first hit in March. Martabak OK, which opened in 2018, sells martabak — Indonesian sweet and savory pancakes — which were voted the best pancakes of Philly 2019 by Philadelphia Magazine. Martabak are extremely popular, and are sometimes called the  “king of street food” in Indonesia.

“We are now focusing on online delivery. We are able to ship to most of the states in the US, Texas, California, Florida, etc.,” Sonnie said. The restaurant, which has no outdoor seating, can only fit 10 patrons.

Before the pandemic, many of Martabak OK’s customers were other Indonesians, visiting from DC, or New York City. They came for the martabak and stayed to take pictures in front of the restaurant’s colorful murals. “Since we can’t do that anymore, we try to sell our products online and it helps our sales, even though our sales are  still not as good as before the pandemic,” Sonie said. Sonie, originally from Jakarta, also owns D’jakarta Café, another Indonesian restaurant in South Philly, with his wife, Alfitri. For D’jakarta café, they rely heavily on pick up orders and delivery.

Although each restaurant has a different story, from the colorful murals of Martabak OK to the #NotPizza of Hardena, they are part of a bigger trend.

Based on the June 2020 report from Mckinsey and Company, prior to  the COVID-19 pandemic, small businesses accounted for half of private-sector jobs and for two-thirds of net new jobs created from 2000 to 2017.

Over 1,000 city businesses have closed since the start of the pandemic-caused shutdown, according to the Philadelphia Business Journal.

Permanent closures of small businesses are thought to generate more and longer-lasting unemployment than temporary furloughs and layoffs do. Studies of previous recessions show that people who lost their jobs earned 17.5 % less at their new ones — which could be of particular concern for women since pressure on wages could make them drop out of the workforce at disproportionate rates.

The City of Philadelphia estimates financial need from Philadelphia-based small businesses sits at more than $300 million, and it has tried to offer financial assistance.

Ting Wang, Business Service manager in the Department of Commerce explained that there are several programs directed just at small businesses during COVID.

Wang is sympathetic to the situation, “I know business owners in Philadelphia are working tirelessly to adapt, and we appreciate the heroic efforts of all our businesses — large and small — to stay open and to keep people employed,” she said in an email.

As for funding, Wang mentioned two private options, the PA 30 Day Fund which gives small loans of up to $3,000 and the Comcast RISE grant which is aimed at businesses owned and operated by Black, Indigenous and People of Color.

The City itself offers tax relief measures to help businesses cope with the loss of indoor dining as well as resources available through the Department of Commerce.

“The Philadelphia Department of Commerce recently launched the Business Resource Finder,” Wang added, saying that it was an “online tool where users can search for free or low-cost services available to Philadelphia businesses, including funding opportunities, legal assistance, workshops, and more.”

The City has also allocated $13.3 million dollars in grants and loans through the Small Business Relief Fund. These have gone out to over 2,000 businesses. Of the 7,232 applicants, 84% were considered eligible, but only a third were awarded a grant or loan. Hardena was awarded $5,000 and Martabak OK received $2,500 from that fund.

Wang explained there is only so much that can be done. “While the City has provided support and relief businesses throughout the pandemic, we simply don’t have limitless resources to support the outstanding need,” she said.

“That’s why it’s critical that the federal government works quickly to come together and pass a substantial new relief package to support workers and businesses,” she added, “especially the hard-hit restaurant industry.”