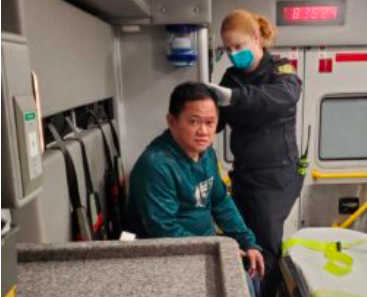 One Indonesian citizen in Philadelphia became victim of Anti-Asian Violence

Afuk experienced acts of violence. Last week, the man who was born in Pontianak, Indonesia, who worked daily at the “Pendawa” Convenience Store in Philadelphia was robbed and beaten on the head.

The incident occurred on Saturday 6 November 2021, when Afuk finished shopping for vegetables and cooking ingredients at the “One Stop Market” store at 20.15 WIB. As he stepped out of the shop on Bancroft Street, Afuk realized that two people were following him from behind.

Afuk, who was still conscious, immediately screamed for help, and he heard a white and black neighbor calling the police. The two robbers fled without being recognized by their faces. Only about 10 minutes later Afuk, whose head was bleeding, was rescued and taken by ambulance to Jefferson Hospital near Chinatown, Philadelphia.

Because he was not seriously injured, Afuk was allowed to go home and his head was not stitched, even though he was bleeding profusely. “After being allowed by the doctor to go home, I returned home,” said Afuk whose full name is Sui Kwang and lives next door to Toko Pendawa, where he works.

A number of Indonesian citizens were shocked by the incident. The Consul General of the Republic of Indonesia in New York, Arifi Saiman, visited him a day later and provided financial assistance.

Anti-Asian violence also occurred in New York and other big cities. The results of research published by the Stop AAPI Hate or (Asian Americans and Pacific Islanders) forum stated that there were more than 9,081 cases of violence. 25% of them occurred from April to June 2021.

Violence with words occupies 64%, followed by attempts to avoid being close to Asians 17%. Physical violence ranks third with 14%. The results of the research show that acts of violence on public roads account for 32%, followed by acts in business areas or inside buildings only around 30%. Around 2 million Asians and Pacific Islanders have experienced this incident since the Covid-19 pandemic exploded two years ago. (This article has been published November 6, 2021)